On Saturday, February 2, the senior high Team Torch robotics team came in first out of 22 teams, qualifying for the LA Regional Robotics event on March 2!  Congratulations to Ben David, Garrett Johnson, Talor Anderson, Travis Day, and Ricky Garcia, and of course, our coaches Rick Loomis and Bill Anderson!  On February 10, Team Torch won several awards, coming in first for the Think Award, third for the Connect and PTC Design Awards, and second for the Inspire Award.  Hurray, Team Torch!!!

On Sunday, December 2, Team Torch attended a community event to demonstrate their robotics expertise, and they were one of seven teams (out of 28) that qualified for the LA regionals!  Way to go, Team Torch!  Here is a link to one news article about the event:  http://www.vcstar.com/news/2012/dec/02/young-people-compete-in-robotics-tournament/

Team Torch, our school’s robotics team, competed for the first time this year on Saturday, 11-10-12, facing 28 other First Lego League teams in Pasadena.  This year’s challenge is called “Senior Solutions,” and the robots are designed to address issues faced by senior citizens.  Our team won the Programming award!  This award was based on how well our team had written and documented their advanced programs, called “My Blocks.” Our team was the only team that wrote a library of these programs that could be used together to accomplish many of the missions.  The team’s robot also utilized outstanding construction techniques that made it durable and versatile.  The team also did very well in the Research Project Presentation, where the team developed the innovative idea of a programmable pill dispenser. It  included unique features such as light and sound alarms when it was time to take a pill, attached water supply, automatic dispensing, and detectors that sense when the pill was taken by the patient. 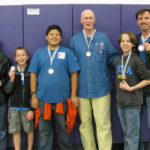 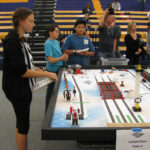 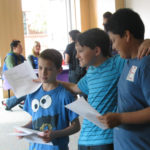